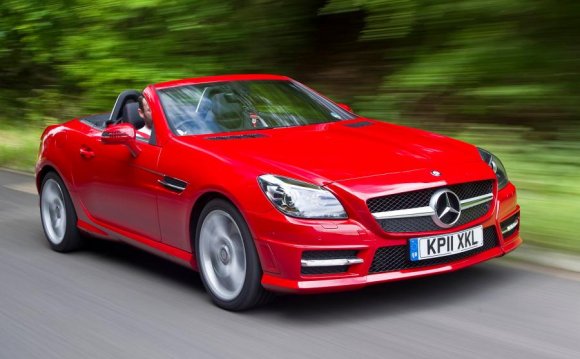 Reviewers say the 2015 Mercedes-Benz SLK-Class has an attractive cabin and offers a nice balance between ride comfort and handling agility, but they say some competitors are faster and more athletic.

A turbocharged four-cylinder engine comes standard in the 2015 Mercedes-Benz SLK250, and reviewers think it generates decent power but its acceleration is unimpressive compared to that of rivals. The SLK350 is equipped with a V6 that critics say is more potent, while the SLK55 AMG is fun to drive thanks to its V8 engine that delivers exhilarating acceleration. The SLK250 comes standard with a six-speed manual transmission, while all other models come standard with a seven-speed automatic. The SLK250 is available with the automatic as well.

Test drivers report that the SLK-Class' automatic transmission doesn't shift as readily as rivals' transmissions. According to the EPA, the SLK250 earns 22/32 mpg city/highway, which is good for the class. Reviewers note that the 2015 SLK-Class has nimble handling, precise steering and a comfortable ride, but that some rivals offer a much more exhilarating driving experience.

According to test drivers, the 2015 Mercedes-Benz SLK-Class has a high-end cabin featuring luxurious materials and a handsome style. The cabin feels cramped, they write, though the seats are comfortable. Trunk space is good for the class. Auto writers say the SLK-Class' infotainment system is simple to use after some practice.

The Porsche Boxster has incredibly athletic handling matched with powerful engine options, according to critics, and they say it is one of the most fun-to-drive cars in the class. Reviewers also think the Boxster has a stylish interior, with spacious and comfortable seats.

Test drivers note that the Chevrolet Corvette's standard V8 engine is extremely powerful and delivers blistering acceleration. They add that the Corvette has agile handling, a comfortable ride and excellent cargo space for a sports car.