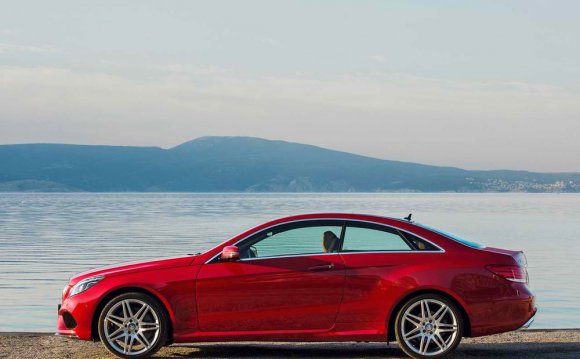 For 2015, the Mercedes-Benz E-Class lineup sees a new E400 style with a turbocharged V6 engine. Other changes are less notable, consisting of minor equipment shuffling.

Say what you want about the 2015 Mercedes-Benz E-Class, but undeniable is that Mercedes has made an extraordinary effort to build an E-Class suitable for your tastes.

Really, whether you want your midsize luxury car to be a fuel-sipping diesel sedan, a turbo V6-powered convertible or a road-burning 577-horsepower wagon, there's bound to be an E-Class much to your liking.

That diesel E-Class earns an EPA estimated 33 mpg combined (that's compact economy car territory) while still being able to sprint to 60 mph in a fairly swift 7.6 seconds. But if outgunning sports cars up the on-ramps is more your thing, you may consider the E63 AMG S model, which can rip to that same speed in under 4 seconds. And sitting in between those two extremes are no fewer than three additional engine choices.

Since its debut for 2010, this generation of the Mercedes-Benz E-Class has been one of our favorites, thanks to its trifecta of refinement, performance and cutting-edge technology. Last year's number of improvements only made it more so, earning the E-Class sedan a pair of Edmunds "A" ratings, but the nearly prohibitive cost of the E63 AMG S wagon and its sometimes-harsh ride drew a "B" rating despite being what some consider the ultimate wagon.

Not one to rest on its hood badge laurels, the E-Class comes into 2015 with a new engine option. The new E400 sports a turbocharged 3.0-liter V6 with 329 hp (in the sedan family, it replaces the E550 and its V8 for most E-Class variants) that should provide performance not far off from that V8's along with superior fuel economy.

Throw in a slew of the newest safety technologies borrowed from the latest S-Class, including an available advanced lane keeping system, and you've got one of Mercedes' best all-around automobiles yet. Of course, there are plenty of great cars in the midsize luxury segment, most notably the 2015 Audi A6, 2015 BMW 5 Series and 2015 Lexus GS. All of these, including the Mercedes, earned spots in our 2015 Sedan Buying Guide, though none of them can match the sheer variety of body styles and engines in the E-Class lineup. If you're looking for the best all-around midsize luxury sedan (or wagon, coupe or convertible), the 2015 Mercedes-Benz E-Class is an excellent place to start your search.

The 2015 Mercedes-Benz E-Class is available as a midsize sedan, coupe, convertible (Cabriolet) or wagon.

The E250, E350 and E400 four-doors are split into two basic types: Luxury and Sport. Luxury models come with 17-inch alloy wheels and a traditional grille with a separate hood ornament, while Sport models switch to 18-inch wheels, a two-bar grille with an integrated three-pointed star and a sport-tuned suspension. Inside, the Sport boasts subtle white-faced gauges and a three-spoke steering wheel in place of the Luxury's four-spoke design.

The E350 wagon also includes a power liftgate, a rearview camera and a rear-facing third-row seat. The E400 Hybrid is essentially a Sport model by default (though its wheels are 17-inchers) with a hybrid powertrain. In addition to the E350 Sport features, the E400 Sport further includes different wheels, keyless ignition and entry, leather seating and both the Premium 1 and Lane Tracking packages (detailed below).

The E400 coupe and convertible come standard with most of the E350 Sport sedan's accoutrements, including 18-inch alloys, and they add heated leather sport seats to the mix. The E550 coupes and convertibles also have an adaptive suspension to go with their standard 18-inch AMG wheels. All convertibles receive a power-folding soft top, a rear center pass-through and a pop-up air deflector.

A wide array of packages is optional for the E-Class. The Premium 1 package adds a rearview camera (standard on the wagon), power-folding mirrors, split-folding rear seats (sedan), COMAND with navigation, satellite radio, a 14-speaker Harman Kardon surround-sound audio system and a power rear window sunshade (except on the convertible, which gets the AirScarf neck-warming system instead), as well as active ventilated front seats for the E550 sedan and heated front seats for the other sedans.