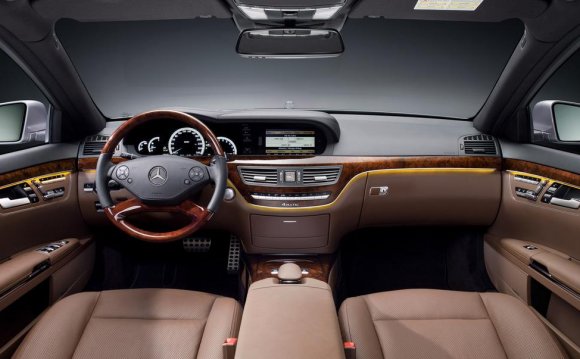 Unless you’re Rain Man—or an S-class nerd—it’s going to be mighty hard to tell the 2010 Mercedes-Benz S-class from the one that’s been on sale since early 2006. The exterior changes are essentially limited to a new front bumper and grille; an integrated exhaust at the rear; and the use of LEDs for the taillamps and daytime running lights and as accent lights in the headlamps. But the minor aesthetic changes hide more state-of-the-art tech underneath, as well as one unwelcome mechanical change.

The new technologies found in the 2010 S, which goes on sale in August, include much of the stuff introduced with the recently redesigned 2010 E-class. That means adaptive high-beams, the addition of pedestrian detection for the night-view assist, a lane-keeping system, and the attention-assist system. Interior changes to the new S-class include a new steering wheel and ambient lighting that is now selectable to one of three hues instead of one. The 2010 model also gets updated Bluetooth functionality, an SD card reader in the dash, an iPod/media interface in the glove box, and HD radio.

As for the driving, the W221 S600 is still the same physics-defying, mind-blowing, people-pampering machine as before. The steering is perfectly weighted, plenty talkative (except for a touch of on-center numbness), and highly accurate. The brakes are super-strong and offer lots of feel. The ride may be the best of any other car’s, a mix of firm confidence and marshmallowy coddling. There’s a bit of lag while you wait for the twin turbos to spool up, but once they’re puffing air into the 510-hp, 612-lb-ft 12-cylinder, it feels as if you could accelerate forever. (Or until you plunge into an ocean, anyway.) A new torque-vectoring function for the stability control on all 2010 S-classes gently brakes the inside rear wheel to somewhat mitigate understeer. There’s no glaring weakness in the driving experience.

You used to be able to unequivocally say the same thing about the 382-hp, V-8–powered S550. But now, depending on how you option the car, you could come away feeling an eensy bit disappointed. You see, avoid the options list and stick with the base car—at about $90, 000, it’s the model for poor people—and you don’t get the active body control (ABC) adaptive suspension. The lack of ABC doesn’t concern us; the car’s body motions are still well controlled even without the impressive technology, which adds a crosswind-stabilization function this year. But ABC-equipped cars (all S600s include it as standard) have hydraulically boosted steering, whereas those without ABC have—gulp!electric-assisted steering. It might not sound like much, but the difference is like having a drink made with well liquor or with the stuff pulled from the top shelf. It’ll do the job, but it’s nowhere near as smooth and satisfying. The electrically boosted rack, which is also found in the new-for-2010 S400 hybrid, is a characterless affair.

It’s really splitting hairs, though, since the S-class in any incarnation is still one of the finest cars in the world. It’s ultra-luxurious, ultra-refined, and ultra-comfortable, and it doesn’t shy away from being hustled. The refreshed 2010 S-class is—as the S always has been—satisfying in a way other cars simply aren’t.