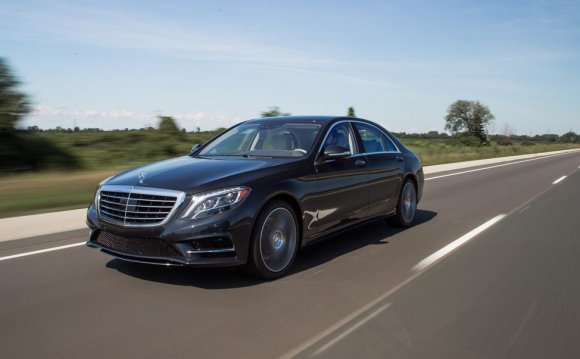 Here is the exact transcript of a conversation we had outside a rest stop off Highway 401 near London, Ontario, with a man standing next to a white bunny:

It was the most strangely polite (or politely strange) exchange we experienced on what was turning out to be a strangely polite day. For the record, the bunny, a fluffy little number, had no interest in being petted and hid behind a concrete planter when we came close. His owner apologized for the snub.

We were taking a break from our long highway cruise from Toronto to Detroit in the new Mercedes-Benz S550. Mercedes CEO Dieter Zetsche told us just the night before that the new S-class is “wellness on wheels.” His statement is as correct as such a statement can be. The S550 is a salon as much as a car, a veritable spa with four seats offering six varieties of massage functions including the divine new “hot-stone” rubdown. There’s an automated perfume dispenser piped into the climate-control system, and heated door and center-console armrests. Except for some high-end Japanese commodes, such comforts don’t typically come in one package. If only the Mercedes dispensed Tim Horton’s doughnuts and coffee, as every exit off the main highway through southern Ontario seems to do. The line at “Timmy’s” was long—long enough that employees set up theater ropes to contain it. The assembled humanity completely eclipsed the counter of the neighboring Extreme Pita, which didn’t matter because it had no customers anyway.

None of this concerned us, of course, because we weren’t really driving. Or rather, we weren’t driving for discrete 16-second snippets of time. The S550 drives itself, sort of. Mercedes has bundled a number of its existing driver-assist systems, included stereoscopic cameras to augment the phalanx of other sensors on the car, and added a steering-assist function to make the S-class into a reasonable facsimile of a self-driving car. It’s called Intelligent Drive, and it can maintain your desired speed, keep a set distance to the car in front of you, recognize and follow that car, recognize lane markers (both solid and broken), and, yes, steer, brake, and accelerate while the driver devours slightly mushy crullers.

With four well-maintained lanes (at its narrowest) populated by generally cour­teous drivers, the 401 is the ideal road for automated driving. Still, after our first semi-autonomous stint we felt a bit like a typewriter enthusiast who is seeing his first-ever word processor. Now, it’s not like a MacBook Pro, but more like one of those Tandy machines that didn’t actually do much of anything besides show you four lines of text at any given time. But it’s there. And you can type on it.