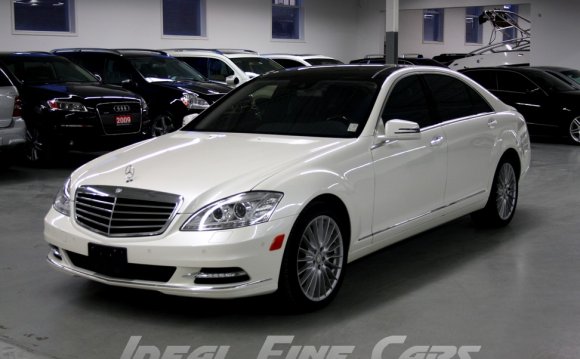 People said the tuning industry will grow out of its obsession with white paint and black accents. But since that clearly hasn't happened, we have no choice but to show you the coolest car to sport that combination this week.

This Mercedes-Benz S550 project is the baby of a Miami-based tuning company called MC Customs. They combined products from two big players in the industry that come from opposite ends of the world.

Let's start with the body kit, which is the work of famed Japanese customizer Wald International. They've been making Black Bison kids for a while now and we have to say they are very good at it. They're among the few companies that can tune an S-Class without totally ruining its classy look.

As usual, the Wald kit adds larger intakes on the side of the front bumper in their trademark style. But there are also huge gills behind the front wheels that you don't normally see on an S-Class. The treatment also includes a custom from grille with white surround, beefy side skirts, a custom bumper with more vents and a large boot lid spoiler.

And since the S-Class will spend most of its time under the hot Miami sun, MC Customs has tinted the windows black and did the same to the taillights for good measure. The final piece of the puzzle is a set of large diameter Savini wheels with low profile tires that make the red brake calipers of the Merc pop out more.