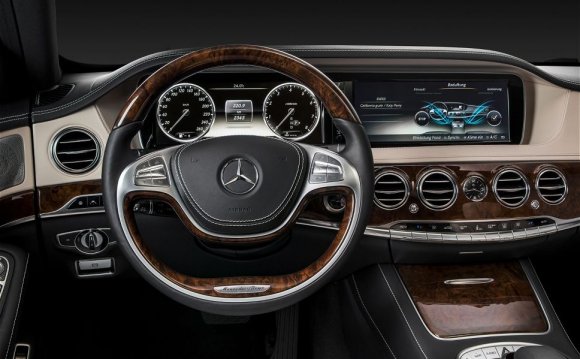 As the flagship sedan for this vaunted German automaker, the 2015 Mercedes-Benz S550 Sedan sets the industry standard for technology and innovation. Whether you are test driving the S550 Sedan on the streets of Aurora, Boulder, Colorado Springs, and Denver, CO, or out on the highway, it can take time to see just how much technology has been built into the S550. Much of this new technology has been focused on keeping you and your passengers safe and alive. In fact, you may not even realize that the 2015 S550 is pay far more attention to the road than you are.

The 2015 Mercedes-Benz S550 is powered by a turbocharged 4.7 liter V8 engine capable of producing 449 horsepower and a massive 519 lb-ft of torque. All of this power is transmitted to the ground via a seven speed automatic transmission and rear-wheel drive. For those who want more traction for winter driving conditions in greater Denver area, Mercedes-Benz offers their patented 4Matic® all-wheel drive system as an option on the S550 sedan (it is standard on the Coupe model).

At testing the 2015 Mercedes-Benz S550 achieved a respectable 0-60 mph rating of 4.9 seconds, which is a very respectable number for a luxury sedan. While quick on the mark is in itself very impressive on its own, the 2015 S550 does so while achieving a combined EPA fuel rating of 20 mpg for the rear-wheel drive models and 19 mpg for those equipped with 4Matic® all-wheel drive.

For those interested in reaching the highest fuel economy ratings, there is also the 2015 Mercedes-Benz S550 Sedan Hybrid. With a powerful 3.0 liter V6 engine and an electric motor connected to a seven speed automatic owners in and around Aurora, Boulder, Colorado Springs, and Denver can expect to see even higher EPA fuel efficiency ratings. The lithium ion battery pack located under the trunk takes less than three hours to charge and offers a full 20 mile range when running on batteries only.

Inside the Cabin of the Mercedes-Benz S-Class S550

As one might expect from one of the premier luxury car manufacturers in the world, the interior of the 2015 Mercedes-Benz S550 offers plenty of space and comfort. Both front seats offer 12 way power adjustments, heat, and position memory. All seating is covered with luxurious leather upholstery matching the MB-Tex® synthetic leather trim. The panoramic sunroof is a standard feature on all trim levels as are auto-dimming mirrors and a power tilt/telescoping steering wheel.