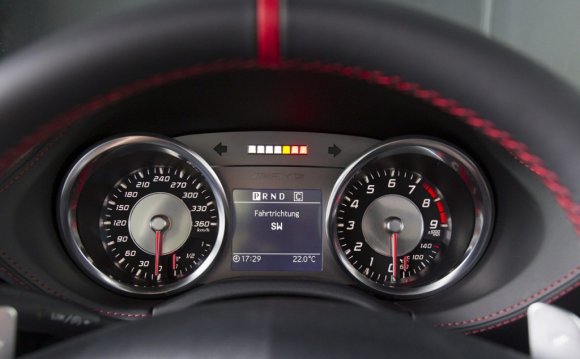 Say what you will about the cheese-block lines and frumpy two-tone paint schemes of the outgoing Mercedes-Benz SL, it was no slave to fads. For 13 years the R129, as Mercedes engineers knew it, bucked changing fashions to embody the company's traditional love of precision engineering, contemporary technology, and restrained design. It was a silk pinstripe on a rack of polyester pretenders.

And as the R129 points its rectilinear nose into the sunset, it's reasonable to expect that the replacement, the R230, which pioneers a new electrohydraulic brake technology (see sidebar) and has a folding hardtop whose choreography would stand with a Bolshoi number, will emulate the pattern. Germans make things to endure. The Brandenburg Gate survived the Halifax bomber, for example. So shall the conservative SL stay its course against the fashion onslaught of chichi new droptops.

Or will it? Today's plutocrats want more than just safe, dignified transportation, and Mercedes' competitors are lining up to give it to them. The Porsche 911 Cabrio offers more performance, the BMW Z8 more exclusivity, the Jaguar XK8 has a more coddling interior and classically evocative lines, and the Lexus SC430 is more avant-garde. The old SL may have been content to be timeless executive wear, but the new SL wants to be this season's sauciest slip-on.

Just look at the way it flaunts itself in public. Mercedes' stylists lengthened the wheelbase by 1.8 inches, widened the track by about an inch, and shortened the overhangs to give it a road-inhaling stance. They folded down the windshield to a garish rake and draped the aluminum sheets in an alluring wedge over the big wheels. The scandalous curves are a magnet for attention and moved one young male passerby to exclaim, "Man, you must get all the women."

Don't be fooled. We don't get the women, and the new SL, despite its gorgeous shape, proves to be only a halfhearted extrovert once you take a closer look. For one thing, the stylists seem to have hit the creative wall after penning the lascivious profile. The nose bears a stock four-sided corporate grille bracketed by a variant of the C-class Mr. Peanut-shaped headlights - livened up somewhat with a tighter waist (Mrs. Peanut?). But the real offenses in our eyes are the hood and fender vents, which look cheap and gape ostentatiously. What fashion crime did the last SL's artfully subtle slots commit?

More important, the new SL moves the driving-excitement needle only incrementally, rather than substantially, out on the road. True, the new car finds 60 mph a full 0.5 second sooner than the last SL500 we tested ( C/D, December 1989), even though its SOHC 302-hp, 24-valve V-8 produces 20 horsepower less than Mercedes' old DOHC 32-valve V-8. And the holding power on the skidpad was a very sticky 0.88 g, 0.06 g better than the SL500 we tested in '89. Some credit goes to the fitment of the optional Sport package, which includes side and rear fascia changes and 18-inch wheels wearing the latest Z-rated Michelin Pilot Sports, upsized to 285/40 in the back.

But the dividends to steering precision and road communication from the revised chassis haven't fully accrued to the overall experience. The SL now enjoys more lively rack-and-pinion steering, but there's still too much cushion in the weights and responses, too much old software left over from the luxury-car department to make the wheel as sharp as it could be. For example, if the SL were a true sports roadster, the steering would give you the good, the bad, and even the irrelevant news. This SL provides a brief executive summary.