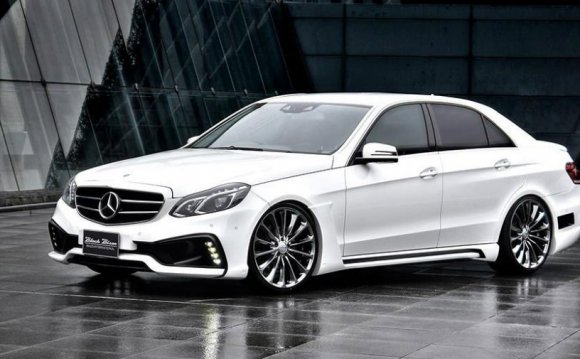 This driver aid uses half as many radar sensors as in the S-class but still manages to trump the flagship’s self-driving abilities. A single front-facing radar, a stereo camera behind the windshield, and sensors mounted in the rear corners allow for up to 60 seconds of hands-free and attention-free motoring on highways and rural roads. The car even changes lanes for you, once you give it the nod by flashing the turn signal for two seconds.

In other words, Mercedes-Benz’s driver-assistance tech now does everything Tesla’s Autopilot does, albeit with the kind of self-imposed restraint you would expect from an automaker with 130 years in the business. While Tesla’s system drives until it can’t, Mercedes requires the driver to periodically signal his or her consciousness by grabbing the steering wheel or poking one of the touch-sensitive pads on the spokes. Let loose on a Portuguese highway—where we had our first drive opportunity of the new E—the Mercedes sailed with smoother steering, gentler braking, and slower lane changes than a Model S, a demeanor that suggests a more refined system, although not necessarily a more confident one.

Don’t blame the lawyers for making you periodically touch the steering wheel. Engineer Jochen Haab, whose 12-person validation team includes three psychologists, says neither the technology nor the driver is ready for set-it-and-forget-it autonomy. He worries that drivers who turn their focus away from the road can’t react quickly enough when these self-driving systems lose the scent. True autonomy, Haab says, would require the ability to see and know what’s beyond the 800-foot horizon of today’s radar, laser, and camera sensors.

It Even Has an Engine!

This E-class is a car so complex and so connected that its internal-combustion engine seems like an afterthought. Or maybe it just needs a proper marketing name: “Active Propulsion Assist”? When it goes on sale in June, the E-class will come with only a 2.0-liter turbocharged four-cylinder. That engine makes the same 241 horsepower in the E300 as it does in the C300, but it’s burdened with an extra 400 pounds in Mercedes’ mid-sizer. While it never feels overtaxed, its presence in this car is definitely due to CO2 and fuel-economy dictates, and the entry E-class will be slower than the outgoing base model, which uses a 302-hp V-6. As consolation, the E300 should be slightly cheaper and more efficient than the car it replaces.

We also took a short drive in the E220d, the first application of Mercedes’ new aluminum-block diesel, and marveled at its tightly controlled noise and vibration. The diesel arguably sounds more refined than the gas engine, even if it is slightly louder under hard acceleration. With 192 horsepower and 295 lb-ft of torque, the 2.0-liter diesel charges off the line, but it can’t execute passing maneuvers with the same authority as the gas four-cylinder. The diesel should go on sale in the U.S. in late 2018 (likely with E300d badging), provided the smoggy fallout of the VW scandal clears by then. A plug-in hybrid with a gas engine also will arrive by the end of the decade.

Those who want to drive rather than ride in their car may want to hold out for the AMG versions, now offered in six-cylinder E43 or eight-cylinder E63 guise. There will be E coupes, convertibles, and wagons, as well, although we may be relegated to an all-terrain variant of the latter, a lifted thing in the manner of Audi’s Allroad.

Mercedes-Benz’s new nine-speed automatic transmission, used with every engine, pairs with either rear- or all-wheel drive in the E300. In Comfort mode, the gearbox often reacts to full-throttle kickdowns with two distinct and slightly sluggish steps, but Sport and Sport+ modes quickly erase that complaint. There, the gearbox holds a low gear and then snaps off perfectly timed, seamless downshifts as you brake ahead of a turn—these gearchanges would be impressive in an AMG model.