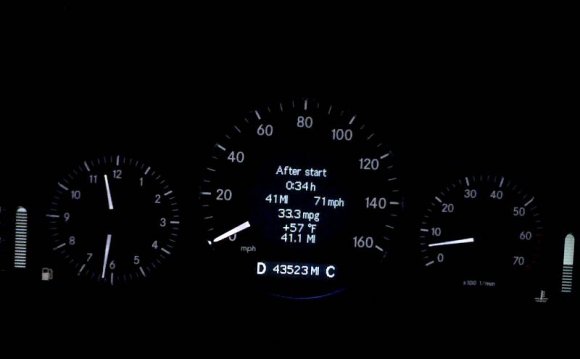 Inside the Frankfurt auto show, where E63 AMG sedans and extravagant concepts such as the S-class coupe rule the Mercedes-Benz stand, it’s easy to forget that the German automaker also builds fuel-sipping, stripped-down taxi cabs for other parts of the world. So it is that the 2014 E250 BlueTec, offering but four cylinders and vinyl seating, quietly arrives this fall with the highest EPA fuel-economy ratings in the Mercedes lineup.

Of course, while leather is a $1620 option, U.S. models don’t come bare—cruise control, eight-way power-operated driver and passenger seats, and remote keyless entry are all included, to name a few standard features. Rear-wheel-drive models start at $52, 325 and deliver an impressive 28-mpg city/45-mpg highway rating, while 4MATIC models—Benz’s first all-wheel-drive diesel sedan—drop down to 27 and 42 mpg for $54, 825. That’s a huge leap over the previous E350 BlueTec’s 22/33 rating, all thanks to a new 2.1-liter twin-turbo four-cylinder that cranks nearly as hard (195 horsepower and 369 lb-ft of torque at 1800 rpm) as the old 3.0-liter single-turbo V-6. In a brief test drive, we found the engine refined (despite some low-rev vibrations) and eager to scoot the car along.