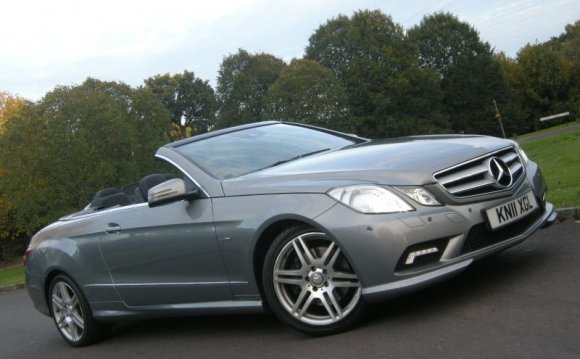 There are certainly worse things in life than firing up the twin-turbocharged 4.6-liter V8 engine installed in a 2014 Mercedes-Benz E-Class convertible, powering down the top, and then roaring along the sun-drenched California coastline to the winding mountain roads that overlook Malibu. So when I complain about how hot it was on the day that I sampled the new 2014 E550 Cabriolet, or mention that the ventilated front seats had trouble wicking the sweat away from my body, you'll have to forgive me. It's part of my job.

Mild and Wild Flavors of the E-Class Cabriolet

Good thing that this Mercedes gives its buyers few other reasons to complain. Two versions of the 2014 Mercedes-Benz E-Class Cabriolet are for sale: the E350, equipped with a 302-horsepower 3.5-liter V6 engine, and the E550, featuring a 402-hp twin-turbo V8. The price premium for the E550 Cabriolet amounts to $7, 100, a fairly steep premium to pay in order to arrive at 60 miles per hour just 1.3 seconds sooner. You get more than extra power with the E550, of course, but the added muscle is the main reason to upgrade.

Flex it, and the E550 Cabriolet proves gorgeously brutal, bellowing under throttle and pounding down the pavement like a linebacker zeroing in on a target, yet exhibiting surprising grace as the driver flings it around corners. Peak hp arrives at 5, 000 rpm, just as the engine's 443 lb-ft of peak torque completes its availability from 1, 600 rpm to 4, 750 rpm. Translated, that means the E550 Cabriolet is always ready to rumble, and a standard 7-speed automatic transmission with paddle shifters ensures that the driver can tap into the prodigious power curve at any time.

Slow things down, and the E550 Cabriolet transforms into a stately, respectable member of society, the only hint of its raucous alter ego evident in the twin-turbo V8's authoritative burble. Select the car's ECO driving mode, which engages the automatic stop/start system, and the nearly 4, 500-lb automobile will average better than 20 miles per gallon if you're easy on the gas. Calm, cool and collected, the E550 Cabriolet is as perfectly suited to valet stands as it is to hairpin curves.

What makes the 2014 Mercedes-Benz E-Class Cabriolet even better is the fact that it's a convertible. Mercedes uses a power-operated cloth top for this car, rather than an increasingly common power retractable hardtop. As a result, the E-Class convertible offers 11.5 cu ft. of trunk space with the top raised. Unfortunately, when the top is dropped, the remaining 8.8 cu ft. of space is configured impractically; I had trouble fitting roll-aboard suitcases underneath the folded roof, making it harder to pack the car for a weekend road trip. Golf clubs, however, will fit without a problem, and it's worth noting that a pass-through into the rear seat allows the E-Class Cabriolet to carry longer items such as skis and poles.

The E-Class convertible's cabin exudes quality in terms of its materials and construction. The front seats feel firm at first, but over time they prove to be quite supportive, and they feature heating and ventilation to improve comfort regardless of weather conditions. The E550 Cabriolet also has an AirScarf system that blows warm air onto front-seat occupants' necks in order to ward off the chill when driving alfresco on spring or fall days. Feel free to take friends on a drive, too, because the E-Class Cabriolet offers a decent-sized rear seat. The seat is positioned high for a good view out - but it is fairly narrow, making it more suited to smaller and shorter people.

Mercedes also supplies an AirCap system for the E-Class convertible, which is designed to reduce wind buffeting and create a draft-free cabin. Once the car is moving, an airfoil rises from the top of the windshield to force air currents up and over the cabin, while at the same time, rear wind blockers rise to eliminate back drafts. Raise the windows, and AirCap is effective for front-seat occupants. In fact, my better half commented that this Benz had the least blustery cabin of any convertible she'd ridden in. My kids, however, disagree, complaining about the wind and the cold when they ride in this car with the top down, leading me to conclude that perhaps AirCap is effective only for front-seat occupants.

My E550 Cabriolet test car had a reversing camera and a Surround View system - options that really ought to be standard equipment, considering how awful rear visibility is, even with the top down. The Surround View system is particularly helpful when parking and maneuvering in tight quarters. Thanks to these technologies, it's easier to drive the E-Class Cabriolet.