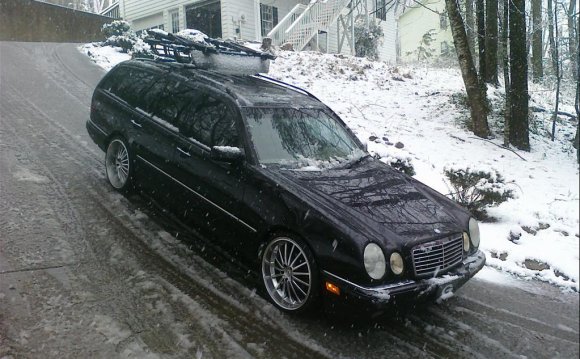 According to Mercedes-Benz, the 2007 E320 BlueTec has an "unprecedented regard for the environment." Making use of the clean-diesel technology pioneered by DaimlerChrysler in Europe (and recently adopted by Volkswagen and Audi), the 2007 Mercedes-Benz E320 BlueTec is the first in a new generation of diesel cars that aims to replace the stereotype of diesel engines as smog-spewing smokestacks with one of a clean and efficient alternative to gasoline engines. With all the upscale refinements we expect from Mercedes, the stylish and comfortable E320 BlueTec is the ideal Trojan horse for the next generation of diesel engines in the United States.

Test the tech: Beverly Hills and back or bus
For our tech test of the 2007 Mercedes-Benz E320 BlueTec, we decided to see just how efficient its diesel engine really was. Armed with the EPA estimates that showed the V-6 seven-speed automatic E320 was capable of 37mpg on the highway, we devised a road trip to the furthest point from the CNET headquarters in San Francisco to which we could drive to and back on one tank.

Having done some calculations based on the size of the E320's fuel tank (21.1 gallons) and the estimated highway mileage (we agreed on the Mercedes estimate of 35mpg rather than the more optimistic EPA rating), we figured that the farthest we could go on one tank would be about 757 miles, assuming that we managed to maximize fuel economy for the entire trip. A dig around on Google Maps showed us that the Beverly Hilton hotel in Los Angeles is 377 miles away, making for a round trip of 754 miles: perfect.

We fill up in San Francisco, intending to make it to Los Angeles and back on one tank.

Needless to say, our driving was not going to be all open freeways and deserted city roads, and so we figured we would just have to ride our luck in terms of negotiating the traffic on both ends of the journey, and maximize our mileage by using a number of economical driving techniques on the freeway.