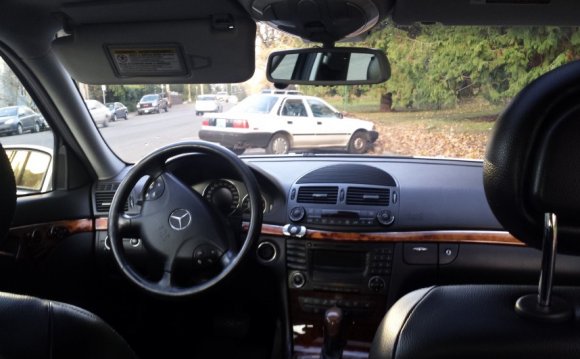 Last year, Mercedes-Benz introduced a new generation of its E-Class sedan lineup with the goal of dominating the premium midsize market segment. A 221-horsepower, 3.2-liter V-6 engine powers the E320, while the E500 gets a 302-hp V-8. Both are slotted between the German automaker’s midsize C-Class and top-rung S-Class.

A high-performance E55 AMG sedan that is equipped with Formula One-style gearshift buttons on the steering wheel and an AMG-developed four-stage Airmatic air suspension also debuted in 2003. Fitted with a supercharged V-8 engine that produces 469 hp, it’s called the fastest Mercedes ever.

E-Class wagons have joined the sedans as 2004 models. Both come in E320 and E500 forms. The wagons feature a movable, hydraulically controlled loading tray to ease loading of large items. Mercedes-Benz’s 4Matic all-wheel drive is available on both the sedans and wagons; rear-wheel drive is standard.

Sport versions of the sedans and wagons are available, and rear-drive E500 models get a new seven-speed-automatic transmission for 2004. Bi-xenon active headlights are available.

Moved to a new platform in 2003, the E-Class sedan displays more flowing lines than its predecessor and sports a lower, more swept-back front end. Oval headlights are angled back more sharply, and a sculpted trunk edged aside the former squared-off profile. The front fenders, hood, trunk lid and bolted-on frame members are made of aluminum. An Airmatic air suspension is standard on the E500 and optional on the E320.

Front-seat occupants in the five-passenger interior face a V-shaped console. Standard and Sport models are available, and the Sport edition features black bird’s-eye maple trim rather than the brown walnut interior used on other models.

Civility reigns behind the wheel of the latest midsize sedan from Mercedes-Benz. Everything about this car is smooth, fine, lush and luxurious.

In the 2003 redesign, the E-Class lost most of the heavy feel that was unpleasantly noticeable on previous models. The refined E500 version manages to deliver nearly rocketlike acceleration, whether it’s starting from a standstill, passing or merging. Trimmed in beautiful wood, the dashboard is a little too complicated for some tastes, and the tachometer should be a bit larger. But when you start picking out flaws on this level, it’s obvious that you’re facing an excellent automobile.

Consumers seeking stunning four-door performance need search no further than the E55 AMG, which responds to the throttle like a supercar and has taut handling to match.