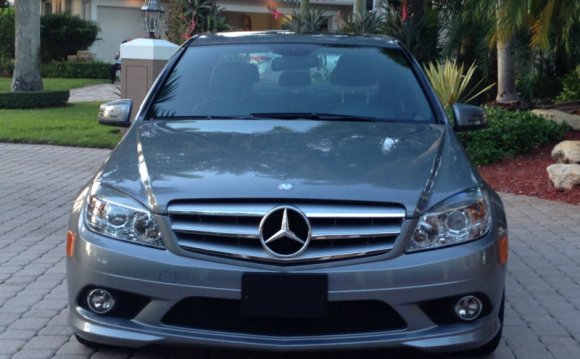 The 2010 Mercedes-Benz C-Class is neither the sportiest nor most luxurious 2010 midsize car available, but it strikes the middle ground of both, with an upscale interior and a refined, buttoned-down chassis.

When it was new, critics liked the C-Class because its suspension feels sporty but not overly harsh, and its interior has a good design, as well as a quality fit and finish. Most said the C-Class isn’t as agile as some of the sport sedans it competes with, but it generally feels composed during more exuberant driving, especially Sport models, which have firmer suspension settings. Those looking for an all-out performance machine may like the C63 AMG. The C-Class has strong safety scores, which also help it rank high in the class.

Base C300 models have a 3.0-liter V6 that produces 228 horsepower. While critics weren’t taken aback by the C300’s power, most said it is potent enough for reasonably quick passing and merging. Many critics preferred the more powerful C350 Sport, which features a larger, 3.5-liter V6 that puts down 268 horsepower. Rear-wheel drive is standard across the board, but all-wheel drive and a manual transmission are available on C300 models. A rear-wheel drive C300 achieves 18/26 mpg city/highway, while adding AWD reduces fuel economy minimally. These figures are about average for the class. However, the C350 nets a slightly lower 17/25 mpg city/highway. The C-Class can carry up to 12.4 cubic feet of cargo in its trunk, which is not as much as many competitors can hold.

Inside, critics said the C-Class is well-made and that its seats, at least those up front, are comfortable. However, some wished they were more aggressively-bolstered for hard cornering, and many said the back seats felt cramped. Base models are equipped with leatherette seating, a power sunroof, dual-zone climate control, Bluetooth and an eight-speaker stereo. Upper trims and option packages add features like leather upholstery with front heated seats, navigation, Mercedes’ COMAND infotainment system, and a Harman/Kardon stereo with satellite radio.

If you’re looking for a great sport sedan, you may also like the 2010 BMW 3-Series. Critics often cited the 3-Series as the benchmark among sport sedans thanks to its agile, composed ride and smooth engines. Most critics agreed that anyone who enjoys driving will love getting behind the wheel of the 2010 3-Series.

Critics said the 2010 Lexus IS has a nice interior and a suspension that offers a good balance of comfort and sport. Like the 3-Series, the IS is also available as a convertible, which may appeal to shoppers who don’t need the practicality of a sedan.