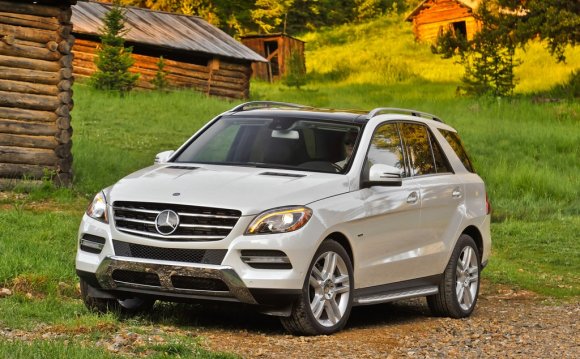 On paper this family-friendly utility checks all the right boxes and it certainly looks the part, with chiseled, if conservative styling and a giant three-pointed star in the middle of its grille. But moving beyond these superficial observations, how well does this vehicle work in the real world and more importantly, does it have the performance to match its styling?

Sliding inside, the ML350 BlueTEC 4Matic’s cabin is certainly nice, but it’s not one of Mercedes’ best efforts. Don’t get me wrong, it’s decently luxurious, though it does fall short of the company’s newer products (cough S-Class, cough, cough).

Overall this car’s interior looks and feels a little dated. Some of the textures could be better and the leather on the seats and door panels seems a little low rent.

Speaking of chairs, a friend’s wife thought the contrast stitching on the lower cushions was way too coarse. She said that if she were wearing shorts or a dress they would actually hurt the skin on the back of her legs. She also thought the leather looked cheap.

In addition to these gripes I was not a fan of the climate controls. They work fine but look like they belong in a Sprinter commercial van, not a high-dollar crossover. The large, plastic click wheels that control temperature as well as the alarm clock-style readouts look pretty sketchy.

When it comes to hauling, cargo, not ass, the ML is ready for action. There are more than 38 cubic feet of space behind the second-row seats. Now, when you fold the back bench down that number more than doubles, topping 80 cubes.
If you’re curious (and we know you are), the ML350 has a maximum payload rating of more than 1, 700 pounds, so feel free to load it up with a few hundred kettle bells or an overweight manatee.

On the subject of weights and measures, the ML350 BlueTEC weighs more than 5, 000 pounds.

Thrust is provided by a 3.0-liter compression-ignition engine. In today’s automotive world a vehicle that doesn’t have at least 300 hp seems hardly worth driving and the ML350’s V6 provides “just” 240 ponies. Making up for this perceived shortcoming is torque and lots of it. This family-friendly crossover thunders with a V8-beating 455 lb-ft of twist! That’s 45 more lb-ft than you get in a Ram 1500 pickup truck with a 5.7-liter Hemi.

In operation this engine is mostly smooth and overall it’s surprisingly refined given the internal-combustion mayhem that’s taking place just ahead of the firewall. Occasionally small amounts of clatter and vibration can be felt but they’re really well attenuated. Aside from a sound initial design Mercedes-Benz engineers must have wrapped this engine in a stack of comforters to keep the ruckus down; hopefully the polyester filling doesn’t ignite when things get hot.

The engine is matched to a seven-speed automatic transmission, a staple of Mercedes’ lineup. It boasts improvements and refinements that supposedly make it smoother and more responsive. A newly designed torque converter and lower-viscosity fluid improve efficiency.

Thanks to these changes and of course the thrifty engine, Mercedes’ ML350 BlueTEC stickers at 20 miles per gallon in city driving and 28 on the highway. Combined it should deliver 23 MPG.

But after testing this vehicle for about 500 mostly highway miles during my recent vacation the ML’s trip computer reported quite a different number. Unbelievably its average consumption topped its already impressive highway score. I managed 28.6 MPG without even trying, a figure that was derived from lots of high-speed cruising up I-75 to Northern Michigan and plenty of wide-open-throttle bursts (make that foot-to-the-floor bursts since technically diesels have no throttle plates but I digress).

Dropping it in Drive

One word that summarizes the ML350’s driving experience is “truck.” Regrettably this luxury crossover feels like a utility-grade work vehicle that’s a generation or two out of date. Its on-road performance is lacking in a number of ways.

One of the first things you’ll notice is the steering; it feels looser than a pocketful of change. The tiller has a light feel to it and the ML tends to wander a little bit in its lane. This behavior is unbecoming in an entry-level hatchback and it’s especially off-putting in a top-dollar luxury schlepper.

Continuing this trend, the brake pedal is also pretty mushy. Stepping on the decelerator requires more travel than is typically expected, causing you to charge at stops.

Finally the ride is a mixed bag. The ML’s chassis is tuned for comfort over handling. Accordingly the body seems to bobble and roll quite a bit over bumps and through corners. Switching the suspension between sport and comfort does firm up the chassis a small amount but the steering feel doesn’t seem to change, nor does the body roll.

Fortunately the engine’s performance adds to the overall driving experience rather than detracting from it. As mentioned above, this compression-ignition V6 is very refined and well isolated. The acceleration it provides is hardly brisk, but it’s more than adequate. It hits early, with nice low-and mid-range torque. Naturally, power tapers off higher in the RPM range; redline is just 4, 750.

In comparison an entry-level, oil-burning BMW X5 xDrive35d starts at $58, 500. Likewise, a bargain-basement Audi Q7 TDI kicks off at about $54, 000, this means the ML has a slight pricing advantage over these rivals.

Curiously this Teutonic crossover is built in Alabama. Have you ever heard a combination German-Southern accent before? Nein, y’all!