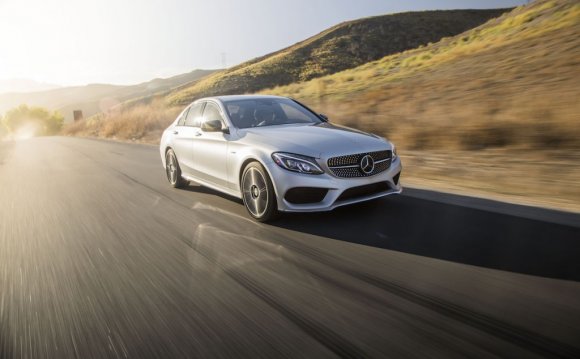 If you're interested in a new Mercedes, you've probably discovered that the C-Class seems to be growing up, offering more features, more room and a higher price tag. It's undergoing so many changes that you might be wondering exactly what separates it from the larger E-Class, so we've created a close comparison of the 2015 Mercedes-Benz C-Class and the 2015 Mercedes-Benz E-Class to find out exactly what's different between the two cars - and what isn't.

On the outside, it's easy to tell apart the E-Class and the C-Class. The E-Class uses boxier styling, which stems from its slightly older design; though the C-Class was fully redesigned this year, the E-Class hasn't been completely reworked since 2010. Thus, the C-Class offers a more modern, curvy look, in keeping with other contemporary Mercedes models such as the S-Class and the CLA-Class, while the E-Class looks a little more traditional. Expect the E-Class to take on the C-Class' design language with its next redesign in a few more years.

There are also some major differences between the C-Class and E-Class on the inside. The C-Class is far more modern, offering a much simpler center control stack, more of a flowing dashboard and more futuristic styling touches, such as circular air vents and a "stick-on" infotainment screen. By comparison, the E-Class has a far more conventional interior, with an integrated infotainment screen, traditional rectangular air vents and a center control stack that's filled with a lot more buttons. Of course, another difference between the C-Class and E-Class is size: The E-Class offers a bigger interior with more front and rear passenger room than its C-Class sibling.

The C-Class sedan offers three engine choices. Base-level C300 models use a 241-horsepower 2.0-liter 4-cylinder, which touts up to 25 miles per gallon in the city and 34 mpg on the highway and comes with rear- or all-wheel drive. Drivers who want more power can opt for the C400, which offers a 329-hp turbocharged V6, standard all-wheel drive and fuel economy ratings that reach as high as 21 mpg city/29 mpg hwy. Finally, shoppers especially interested in performance can choose the new C63 AMG, which boasts a 4.0-liter turbocharged V8 that boasts 469 or 503 hp depending on which version you choose.

That's a lot of numbers, but here's the gist: In general, the C-Class offers slightly smaller engines with slightly better fuel economy than its E-Class stablemate. But it also offers fewer choices, as there's no diesel, no hybrid and no V8, all of which you can get in the E-Class.

That isn't to say that the E-Class doesn't impress with its wide range of high-end technology and equipment, because it does. But it's hard to trump a brand-new model - even if the C-Class is technically the E-Class' baby brother.

On the road, both sedans feel surprisingly sporty - especially when you consider Mercedes' typically staid image. The automaker has been trying to change that image lately, and it seems to be working, at least if the C-Class and E-Class are any indication. Both feel athletic, quick and fun to drive, from the base-level C300 and E250 BlueTEC all the way up to the high-performance C63 and E63 models from Mercedes' high-performance AMG division.

With that said, there's no doubt that the C-Class is a little more enjoyable than its E-Class stablemate. Not only can you feel the C-Class' smaller size when you turn the wheel, its suspension seems to have been tuned a little more for performance, while the E-Class instead favors comfort. Otherwise, these two cars share a lot, from excellent visibility to strong, sure-footed braking. From a driving perspective, we suspect you won't regret either choice - but you might have more fun in a C-Class.

In testing carried out by the federal government's National Highway Traffic Safety Administration, both the C-Class and E-Class earned only four stars overall out of a possible five. The E-Class fared better in testing carried out by the nonprofit Insurance Institute for Highway Safety (IIHS), earning the firm's excellent Top Safety Pick+ score, though the C-Class has not yet been subjected to the IIHS's full battery of tests.

As for safety features, both the 2015 Mercedes-Benz C-Class and the 2015 Mercedes-Benz E-Class offer a wide range of some of the most high-tech safety features around. Specifically, they include an impressive array of standard features - a backup camera, side-curtain airbags, traction control and anti-lock brakes - along with an almost endless list of safety options such as a partially autonomous steering system, an automated parking system, a 360-degree camera, adaptive cruise control and more.