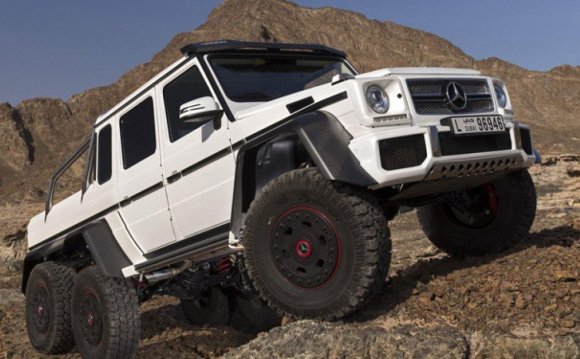 An exceptionally rare 2015 Mercedes-Benz G63 AMG 6×6 is currently up for sale in Dortmund, Germany. Although no official production numbers have been released, approximately 100 units were created so it’s very rare to see one up for sale.

For starters, this G63 AMG 6×6 has been painted in Obsidian Black and comes complete with a selection of optional extras. These include a surround sound system from Harmon Kardon as well as a heated windscreen, the exterior stainless steel package, an AMG Performance steering wheel, the chrome package, AMG carbon fibre trim pieces as well as heated front and rear seats. Meanwhile, the rear luggage compartment features wooden panelling while the seats have been adorned in quilted black leather.

The potent offroader has only travelled 100 km, meaning its engine is essentially untouched. That engine is the same 5.5-litre twin-turbocharged V8 engine as the more run-of-the-mill G63 AMG. It delivers a total of 536 hp and 560 lb-ft of torque. Coupled to that engine is a seven-speed transmission with drive sent to all six wheels. Despite the vehicle’s massive size, it can hit 100 km/h in an impressive 6 seconds.