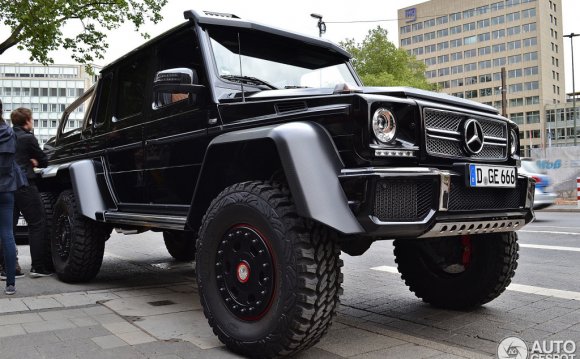 The most flabbergasting aspect of the 2014 Mercedes-Benz G63 AMG 6×6 isn’t that it exists, but that it’s a production vehicle. As in, you can buy one. AMG has already built nearly 60 units so far this year. I just spent a week at the Magna Steyr plant in Graz, Austria — home of the Geländewagen — and saw five 6x6s: three customer trucks, one for display, and the slate-colored beast you see here.

Turns out that the gargantuan 6×6 is actually hand-built on the same assembly line that produces every other G-Wagen. A workforce 1500 strong recently added a second shift because G-Wagen sales are through the roof, with 2012 the stout off-roader/military vehicle’s best full sales year since production started in 1979. As of November 2013, Mercedes had already sold more of them than in all of 2012, and about half of those are the very pricey G63 AMG models. Get this: In the States, the G63 is now the best-selling AMG product.

Since the G-Wagen is hitting its stride after 34 years, Axel Harries, the “Boss of the G, ” gave the green light to throw caution, common sense, and any pastiche of restraint to the wind and green-light the 6×6. Why? Aside from massive profits, the automaker had the parts lying around. The majority of the monstrosity is made of standard G-Class parts.

Most of the cab, the three-axle frame, and retuned transfer case are from an Australian military G. The 5.5-liter, twin turbo V-8, seven-speed transmission, and quilted diamond-stitched leather Designo interior are from the G63 AMG. There are, of course, new pieces, including the 18-inch beadlock wheels wrapped with gummy 37-inch tires. These tires can be centrally inflated or fully deflated with the help of four 20-liter air tanks and a giant compressor. Zero pressure to a roadworthy 2 bar happens in 20 seconds.

Then there are the Öhlin gas bypass shocks, stiffer springs, more robust bump stops, and a bunch of custom aluminum pieces, such as the rear bumper. The real money, however, went into the geared-offset “portal axles” required to accommodate central tire inflation.

Initially designed for a future armored military G, not only do they give the 6×6 its impressive 18 inches of ground clearance, but they were designed with carlike performance in mind.

All of the above leads us to numbers, and like everything else about the 6×6, they are jaw-dropping. Ready? At current exchange rates, the 6×6 costs a little less than $625, 000. Take out the 19 percent European value-added tax and you’re still looking at around $525K. (Sadly, Mercedes isn’t selling the 6×6 in the States, or the V-12 G65 — yet.) The 6×6 weighs a touch more than 9000 pounds (up from 5876 for our last standard G63), yet Mercedes claims this monster can hit 60 mph in fewer than 8 seconds. Not only is the ground clearance way up compared to the regular G-Class’ 8 inches, but fording depth is up from 24 to 39 inches. In fact, every off-road metric is hugely inflated, from approach/departure angle (36/27 degrees for G63, 50/45 degrees for 6×6) to breakover angle (21 degrees versus 50). It’s just over 19 feet long and 7 feet wide, and 7 feet, 9 inches tall. There’s an additional 13.2-gallon fuel tank, activated by a toggle switch above the rearview mirror next to the tire pressure controls, that increases the total amount of gas on board to 38.6 gallons. That last bit gives you some idea of the 4.5-ton thug’s fuel consumption. (Nicht gut!)