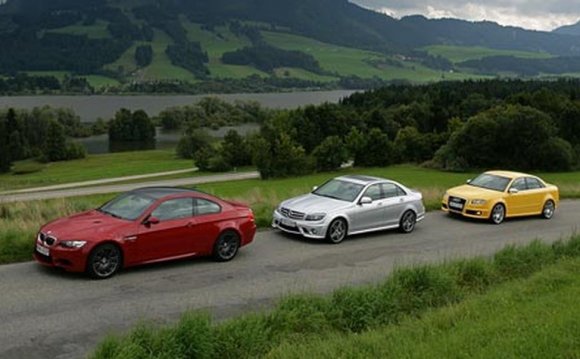 There's probably no better place to run a comparo of three examples of automotive gluttony than in Bavaria, one of 16 German states and the one we think has a lot in common with the mind-set found in our own swaggering state of Texas.

Like Texans, Bavarians are pugnaciously independent, quick to recite what makes them and their region so special, and believe that the best way to settle an "issue" is to put you on all fours in search of your front teeth. Texans invented the beef critter; Bavarians discovered the pig. The menu stops about there and shifts directly to the drinking section. In the Bavarian south, indulging in swine and pilsner is no sin-it's an inalienable right. Walk into the famous Hofbräuhaus drinking hall in Bavaria's capital of Munich-it escaped allied bombs in World War II, proof that God exists-and order up three liters of super-strength German suds to kick off your noonday antics, and no one blinks an eye in horror. To go with it, how about a slab of Limburger, maybe a two-pound pretzel?

So Bavaria's culture of carpe diem-Seize the day! Hell, carpe everything!-is an appropriate backdrop in which to run free in three sedans that any Bavarian would be thrilled to call his or her own.

Throw in Bavaria's many unrestricted autobahns, bucolic and pothole-free secondary roads, the glorious foothills of the Alps to the south, and it's the place to unleash the power and handling possibilities of three 400-plus-hp sedans.

It should come as no surprise that two of the three cars tested here are made in Bavaria. From Ingolstadt comes Audi's all-wheel-drive RS 4. The premier model in the A4 range, the RS 4 comes from Audi's sporting subsidiary, Quattro GmbH, the performance outfit that builds the R8 supercar. In that spirit, the RS 4 and the $114, 100 R8 share the same direct-injection V-8. Although the RS 4 is now facing its final year of production, it still feels frisky enough to be pitted against some new competitors.

Then there's the '08 BMW M3. As the first M3 to be powered by a V-8 engine-a 414-hp 4.0-liter-the M3, now in its fourth generation, has some worried that V-8 power has changed its character from race bred to overfed. The new one might in fact be closer in concept to the previous-generation V-8-powered M5 than to the old M3. Even if that's correct-and we're not convinced that's true-that M5 was an astonishingly impressive performer.