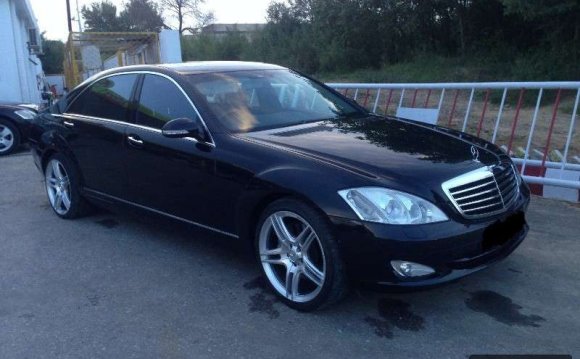 The Mercedes S-Class is the flagship luxury sedan from Mercedes Benz. It is its largest, highest-performance, most luxurious model. It is very powerful, its interior is opulent and it features every technology the automotive industry can imagine. "The S-Class defines personal luxury, " raves the Chicago Tribune. The Milwaukee Journal-Sentinel comments, "If there is such a thing as an embarrassment of riches, surely the Mercedes-Benz S550 luxury sedan is somewhere on the list."

S-Class sedans offer some of the most powerful engines available on any sedan, combined with nimble handling that belies their large size. Inside, they are so luxurious that the seats themselves are built around 11 separate air chambers that each driver and passenger can inflate to varying degrees to fit the seat to hir or her own form. Those chambers will then inflate and deflate in response to the car's movements to better hold each passenger in place as the driver takes advantage of that handling. There's simply nothing else like that experience, even in this class.

But the S-Class sometimes tries to be too many things to too many segments of the market. In its lowest trim, the S-Class competes with the Lexus LS, Audi A8 and other premium luxury sedans - and it's more expensive than all of them. Its higher-priced models challenge hand-built vehicles from ultra-premium makes like Rolls Royce and Bentley. The most expensive S-Class costs as much as two of the least expensive, plus a Honda Civic. With that incredible span, Mercedes has produced a car that might be too expensive for the competition in the super luxury class, and not exclusive enough to compete in the rarified air above it. Car and Driver says that the S65 AMG "costs as much as 15 Ford Focuses, " but "looks like the neighbor's half-as-expensive S-class." That could push some premium buyers to more exclusive nameplates. The only other consistent complaint we can find among reviewers is that Mercedes' COMAND (Cockpit Management and Data) driver-interface, which controls most of the car's electronics through one screen, is not for everyone. Some find it difficult to learn, while others do not. Test drive it to know which group you fall into.

The S-Class is sold in an S550 model and an all-wheel-drive S550 4Matic edition powered by a 5.5-liter V8 making 382 horsepower. An S63 AMG edition ups the ante with a 6.2-liter V8 at 518 horsepower. Both hose models use a seven-speed automatic transmission.

A mid-level S600 is driven by a 6.2-liter twin-turbo V12 putting out 510 horsepower. Finally, nearing a $200, 000 purchase price, an S65 AMG ultra-high-performance edition lays down an eye-watering 604 horsepower. Mercedes says this model goes from 0 to 60 mph in slightly more than 4 seconds. And this is a large, stately sedan. The V12 models both use a five-speed automatic transmission.

How many users does superhuman have? What skills to list on resume? When questions to ask? What create bed bugs? Who internet service provider? Which summary of the passage is the best quizlet? How many internet providers are there in the us? Where leaders spend their time? What degree is a fever? Where to find developer options in vivo? How challenge sport mode? Which important documents to keep? How much developer to color? How often should you change your sheets? Where architect sleep? Why my favorite animal is dog? How many leadership principles does amazon have? Why subject biology is multidimensional subject? How grow a beard? Where is maintenance court? Whom define? Which summary of the passage is the best? Where transfer car title? How often does squid industries restock? How much american opportunity credit? Where to watch generation war? What is theory before theory? Examples when friction is harmful? Where does generation z end? Why workshop safety is important? How much marketing budget for startup? Where are espresso machine from? When research invented? How to find out who funded research? How much interview kickstart cost? How many grow lights per plant? Why recruiter is important? How often meaning in urdu? Where to graph 3 2? Who has been interviewed? Who career sign in? How many engineering colleges in india? When internet explorer will die? Who vacancies south africa? Activities when babysitting?
Source: usnews.rankingsandreviews.com