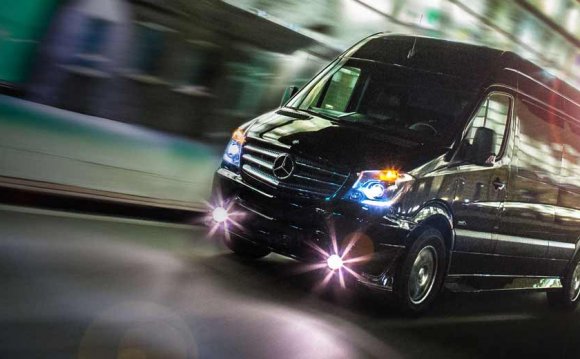 By cutting away the van's side, Mercedes was able to place focus entirely on the clean, white interior. The open-air cabin includes a bench seat that transforms into a double bed and a kitchen area on the other side. The front driver and passenger seats swivel around to serve as living and dining seating. The materials selection of white leather seating, high gloss white furniture finish, and gray laminate flooring was made to give the Sprinter camper the feel of a yacht. The interior also has Alcantara trim, LED lighting, and a combination bathroom/wardrobe in the tailgate.

The Viano Marco Polo, which Mercedes showed in two versions, was built with the help of Westfalia Van Conversion, which had a third model on display at its own booth. Based upon the middle-sized Viano model, the Marco Polo comes standard with a pop-up roof. The driver's side includes a fully stocked kitchenette with a stove, sink, water system, refrigerator and cupboards. There's also additional storage space, including a wardrobe closet. The Marco Polo's rear bench is actually two individual electrically adjusted seats that can recline and flatten down into horizontal position. The seats also include an electro-pneumatic side bolster system that provides better lateral support and shaping, a comfort aimed at long road trips.

The Mercedes Viano Fun comes in both five- and seven-seat varieties. Like a number of the other van campers we saw in Dusseldorf, the Viano Fun features a rail-mounted seating system that makes the interior layout super flexible. The seats can quickly slide into different positions and be removed completely. In camper format, they're arranged around a fold-out table. The rear seats fold flat to create a sleeping platform, and an optional pop-up roof can serve to hold additional sleepers.

Mercedes claims that its vans are in hot demand around the world by camper conversion outfitters, stating that it sends around 4, 000 vans a year to converters in North America. The German luxury marque definitely had a strong presence in Dusseldorf, beyond just its own booth. We ran into plenty of other Mercedes-based camper vans in Dusseldorf, including a few brutish off-roaders.
Source: www.gizmag.com