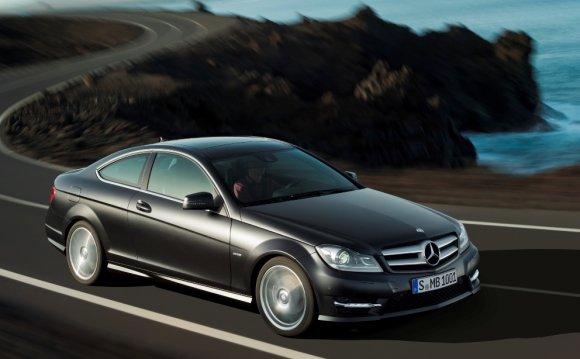 The current Mercedes-Benz C-Class coupe, unveiled in model year 2012, fixes the wrongs of the previous generation. It aims at a higher market segment and no longer looks like the “cheapest” C-Class. In fact, it’s priced higher than the base sedan: the lowest priced C-Class coupe starts at $37, 800, while the sedan starts at $35, 350. With classy, understated styling and a wide range of equipment, the C-Class coupe is well positioned to compete with the two-door offerings from BMW and Audi.

The 302-hp V6 feels strong under all driving conditions and emits a husky growl under throttle. Sixty mph comes up in only 5.9 seconds. The seven-speed transmission is smooth, capable of imperceptive shifting, and can even skip up to three gears when it downshifts. The ride is firm, well controlled and never harsh, and transmits only a bit of road coarseness. The car conveys a sense of solidity that you would expect from a Mercedes-Benz. The doors close with a vault-like thunk and most materials in the cabin feel adequately high quality.

Handling is very good, but the C-Class coupe doesn’t have the same kind of built-for-performance feel that many BMWs deliver. That’s not to say you can’t hustle down curvy canyon roads… it’s just that the C-Class seems more appropriate at more relaxed speeds. For example, the electric power steering feels a little too light at higher speeds and the selectable Sport mode barely changes the transmission’s shift points at all. It’s as if the car is saying, “You really don’t need to be so aggressive.” Well, we did drive aggressively now and then, and found ourselves using the manual shift paddles frequently because the Sport mode wasn’t holding the lower gears long enough, and the transmission would upshift immediately when we let off the gas.

It’s still a precise, well-handling machine and fun to drive, thanks to the well-tuned suspension settings and more-than-adequate power. Brakes feel strong enough to haul the car down from triple-digit autobahn speeds without drama.

Fuel economy with the C-Class is not an issue, either. We achieved 22 mpg after a weekend road trip – not bad for a 302-hp engine and plenty of performance driving with the A/C on. EPA fuel economy estimates are 20 mpg city/29 mpg highway. The turbocharged four-cylinder C250 is a tad more efficient at 22 mpg city/31 mpg highway.

The compact C-Class coupe has a wedge-shaped, sloping beltline that makes it look like it’s ready to roll. Its attractive, mature appearance is distinctly sporty, but with a measure of restraint. It’s not as eye-catching as the former CLK-Class, which was also based on the C-Class platform, but seemed somewhat more upscale with its frameless windows and strong stance. Today’s C-Class coupe is a nice alternative to the popular BMW 328i or 335i coupes, but the Benz might lose a beauty contest against the beautifully sculpted Audi A5 coupe.

The C250 comes with 17-inch wheels, while the C350 has 18-inch wheels as standard; both models have staggered size tires – 235/40 fore and wider 255/35 aft. Daytime running lights consist of a functional and cool line of white horizontal LEDs on both sides of the lower grille. An AMG-inspired body kit is standard, with lower body moldings, rear air diffuser and bold grille with a large Mercedes-Benz star. A Sport package is available that adds 18-inch AMG wheels, a rear lip spoiler, sport seats, red stitching and red seatbelts. Our test car did not have the Sport package, but it had optional twin five-spoke AMG wheels and $1, 515 “Diamond White” metallic paint.

Front seats are superbly comfortable and power adjustable in 14 ways, including a power headrest and lumbar control that can positioned in just the right spot. Both the driver and passenger have three memory settings to preserve their favorite positions. The outside mirrors and power-adjustable steering wheel are also part of the driver’s memory settings. We also liked the meaty feel of the small, flat-bottomed, leather-covered steering wheel.

The coupe is strictly a four-seater. The pair of rear seats have two cupholders placed between them. Rear seats are what you would expect in a coupe – they are hard to access and tight on space. But they’re not impossible for adults to use when necessary, and have adequate space under the front seats for feet. Rear seatbacks fold down for additional cargo space in the 11.7 cubic-foot trunk.

Mercedes’ optional infotainment interface is called COMAND, featuring navigation with 3D city-map display, a rear-view camera, ten-gigabyte hard drive, internet accessibility and more. It’s even possible to add apps like Facebook, Twitter, Yelp and more. But they function only when the car is not in motion.

Mercedes is well known for its safety engineering, and offers some of the same advanced safety systems on the C-Class that are available on its top-level models like the S-Class. One standard feature is Attention Assist, which monitors up to 70 parameters of driving behavior to automatically alert the driver if the system detects signs of drowsiness, such as “erratic steering corrections.”

What others are saying about the C-Class

In Edmunds.com’s C-Class review, editors explain, “As for the coupe, it shouldn’t come as a surprise that its backseat is quite cramped. Legroom is about par for the segment (squished), while headroom is nonexistent for those taller than about 5-foot-8. In total, the C-Class coupe is less accommodating than the 3 Series coupe, no worse than an A5 and better than a Cadillac CTS coupe. Its trunk volume of 11.7 cubic feet is average for the small luxury coupe class.”

The Car Connection is impressed with the evolving quality improvements of the current C-Class. Editors say the rear seating is tight, but otherwise, “Interior appointments are fully to snuff for the American market, with an array of cupholders, cubbies, and door pockets, plus a roomy console and large glove box. And while we haven’t put C-Class interior materials in the top tier in the past, the current version impresses with mostly luxury-grade plastics; nice leather; and wood, metal, and other special trims.”

Bottom Line
Compared to the C-Class sedan, the coupe adds a stylish flair of cool. While not as sporty as a BMW 3-Series or as head-turning as a Audi A5, the Mercedes C-Class Coupe has its own upscale charms. It’s refined and pleasant to drive. The (forward) cabin is very comfortable, constructed with high-quality materials. It has lots of standard and optional technology available, depending on how high a sticker price you can stand. But even the base model is a good-looking coupe with premium character that looks and feels like a Mercedes should.