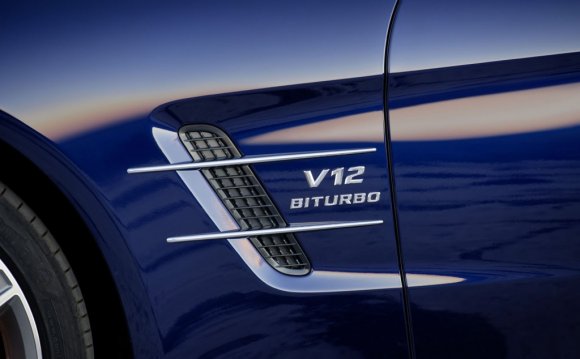 ASSOCIATE EDITOR JAKE LINGEMAN: There are a few cars that exemplify the phrase “effortless speed.” This 2013 Mercedes-Benz CL65 AMG is one of thme. Unfortunately knowing that you can mash the gas and travel into the future is actually more annoying than exciting.

The CL65 carries Mercedes' biggest nuclear reactor, a 621-hp, 738-lb-ft of torque V12, which is probably more suited to moving the space shuttle than a car. On startup it goes from a relatively quiet high-pitched whine to a low burble. But even at low speeds you can tell this engine wants to run. There are slight backfire noises on downshifts, which are always a good thing.

Like the BMW M5, by the time you're though second- and third gears, you're traveling so fast that it's time to hit the brakes. Maybe this would work in the wide open west, or in Germany, but it seems a tad much for the salt-eaten, stoplight-lined roads of the Midwest.

The throttle on the CL65 is sensitive. When you're 1 inch in you're already cruising at a good clip. The traction control steps in anytime you put the pedal down more than halfway, making first gear an exercise in delayed gratification. Once second gear kicks in, you can mash the pedal a little more and feel some of what this car can do. The only time that you can really use all of the power is accelerating from 80 mph, which nearly feels like a 0-60 run.

Instead of a tach, this should have a power reserve meter like the Rolls-Royce's. Cruising at 50 mph down Woodward Avenue had the revs firmly planted at about 1, 050 rpm.

The suspension is pretty soft, even in Sport mode, though I winced over a few bumps that seem to bang the 20-inch tires hard. Steering is muted from the road, which is what people expect in this type of Mercedes.

Style-wise, the CL65 is still my favorite Mercedes besides the SLS. The giant pillar-less window is trick and makes blind-spot checking easy. Visibility is great all around. The matte paint, a $4, 000 option, seems like a bargain when it's literally 2 percent of the price. It's an intimidating coupe, and people like to see it run. Some tried to goad me into dropping the hammer a few times over the night.

The interior looks supremely upscale with the Designo leather. The quilted look always blows me away. Like the other AMGs, this has the active seats that hug you during cornering, which is a good deal if you're quite a bit skinnier than the seat. The massaging function is a little gimmicky; it's better than sitting in traffic without being massaged, but it won't actually heal your achin' back.

Price doesn't even matter. You're looking at the Bentley Continental GT; maybe a BMW 6-series Gran Coupe and possibly a Roller. But the two people I asked guessed about $150K for this beast. They also both loved the paint job, until I told them about the care. But again, the person who buys this won't have to wash the bird crap off his car everyday; he certainly has someone to do that for him.

EDITOR WES RAYNAL: I consider the weekend in the CL65 a success - I didn't get a speeding ticket. With 621 hp on tap it would have been easy to get one. Simply put, it's a beast.

The 6.0-liter twin-turbo V12's 621 hp - a crazy amount of power - is actually easy to live with, thanks to the ESP and traction control systems, and they work well. The thing is insane off the line and while I wouldn't exactly say active body control gives it finesse per se, it does help. This is probably as close to borrowing a Lear jet for the weekend as I'll get. For high-speed cruising, there's nothing better.

The cabin is excellent; the seats adjustable enough to fit darn near anyone. It will embarrass base Porsche 911 owners with its speed, and coddle you like an S-class sedan, which is an interesting combo.

ROAD TEST EDITOR JONATHAN WONG: Being able to say your car has a V12 engine is neat I must say. In the case of the Mercedes-Benz CL-class AMG lineup upgrading from the CL63, which packs a 5.5-liter twin-turbocharged V8, to the 6.0-liter 12-cylinder-equipped CL65 will wreck your bank account for an additional $60, 200.

On the transmission front, the CL65 uses a five-speed automatic, while the CL63 gets a seven-speed multiclutch gearbox. The extra gears and obviously smaller engine give the CL63 an EPA fuel economy rating of 15 mpg in the city and 22 mpg on the highway. As for the CL65, it's rated at 12 mpg city and 18 mpg highway which is crappy enough for the car to be hit with a $2, 100 gas guzzler tax. Of course, consumers considering a CL65 AMG won't bat an eye at the extra couple of grand.

Enough numbers stuff. How does this big boy drive? For something packing all this power, it can be remarkably civil around town. Just lightly press the throttle and the car goes about its business in a supremely smooth manner. However, if you give the right pedal a firmer push from a standstill the traction control will cut power in a hurry. It's the same if you are trying to get on the power early around a corner with the 738 lb-ft of twist available at just 2, 300 rpm making traction control cut in again. Instead you need to roll into the power and that's when you can experience the brute force of the turbocharged monster under the hood. One needs to be careful because the CL65 cruises around effortlessly at speeds above expressway posted speed limits. It's deceptive and will have you saying “oh crap, ” when you spot law enforcement on the road and look quickly look down at your speedometer to see how fast you're going.

The automatic gearbox performs slick upshifts, but a five-speed unit does seem to be outdated for a vehicle that punches in at above $200K. I'm sure it's being used because it's a more robust transmission to handle the V12's monster torque.