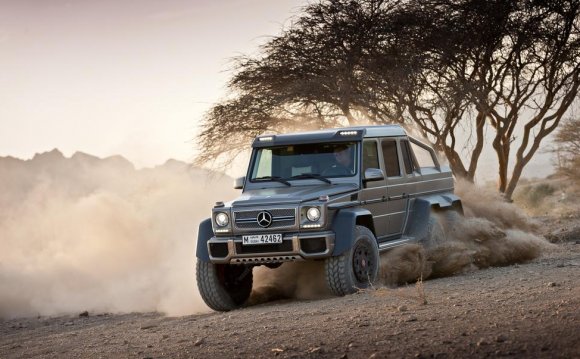 Mercedes-Benz has released European pricing for the G63 AMG 6x6 for its second year of production. The specially modified G-class now starts at €456, 900 for the 2015 model year, or approximately $633, 765. The 2015 pricing represents a miniscule hike over last year's price, which started at €451, 010, or approximately $625, 595 at the current exchange rate. A handful of new standard features account for this increase: a heated windshield, heated mirrors, and an auto-dimming rearview mirror, features that were not standard during the inaugural year of production, for some reason.

Deliveries of the 2015 model will start on Sept. 1, and the truck is now open for orders-at least for those customers who can legally register them in their jurisdictions, which does not include the U.S. We got a chance to drive one of these trucks in the sands of Dubai last year, and we found it well suited for that sort of terrain.

This variant of the G-class entered limited production in 2013, powered by a 5.5-liter twin-turbo V8 producing 544 hp and 560 lb-ft. These performance figures gave it a 0-60 time of around 7 seconds, according to Mercedes-Benz, with all that power being channeled to the all-wheel-drive powertrain via a seven-speed automatic transmission. Spun off from a military version built for the Australian armed forces, the G63 AMG 6x6 has been stuffed with all the luxury trimmings of the standard-wheelbase 4x4 G63, in addition to receiving high profile all-terrain tires, a thoroughly reworked suspension and a cargo bed that's probably too nice to put anything in.