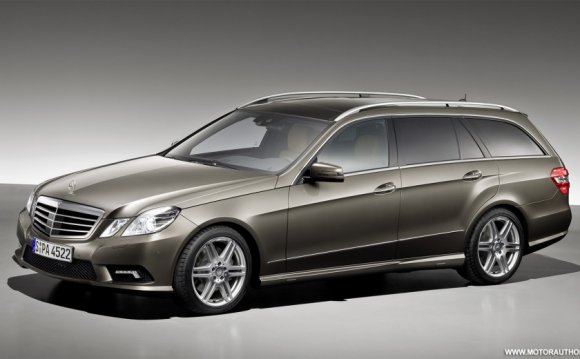 Sure-footed four-corner traction: Standard. Height-adjustable rear AirMatic suspension for deep-snow ground clearance: Standard. Luggage-rack rails ready to accept your Thule ski-rack: Standard (and low enough to show off your Dynastar Ferrari sticks at a comfortable viewing height). Seating for seven (okay, five and two-halves): Standard. Iconic style and a hood ornament that commands respect from the apres-ski club valets: Standard. Could there be a more perfect vehicle than the new Mercedes E-Class wagon for driving up to Deer Valley, Whistler, or Hochgurgl, Austria?

Mercedes-Benz invited us to the latter (if you can say it without dislodging any phlegm, you get a night free) to sample its new E350 4Matic Wagon’s suitability to wintry driving. The visit started with a tech briefing held in an igloo and concluded with a driving session on some of the most nicely groomed parking lots and most gorgeous snow-covered mountain roads on planet earth.

First, you should know that the new E-Class wagon will only be available with the 3.5-liter V-6 and all-wheel-drive. The wicked E63 AMG wagon is finished, at least for the time being. Please observe a moment of silence for its passing. Thank you. Next, you may be encouraged to hear that the latest iteration of 4Matic is lighter (adding just 100 pounds), more compact, and–teamed with the new seven-speed automatic–more efficient (improving by as much as 2.3 mpg on the EPA driving cycle). Its planetary center differential still provides a natural 45:55 front:rear torque split, with slippage at either axle causing friction in the pre-loaded center differential clutch to send as much as 70 percent of the torque to the axle with the best grip.

Mercedes still relies on individual wheel braking to equalize torque side to side or front to rear as needed beyond what the center diff can do. We find this to be a perfectly acceptable solution for on-road vehicles coping with momentary traction losses due to rain, snow or ice (using the brakes to go forward in a hill-climbing off-roader is nowhere near as effective or desirable as proper torque-directing differentials).

And indeed in a series of exercises on a large groomed-snow-covered parking lot, the fourth-generation 4Matic system and its coterie of backup electronic assistants functioned exactly as planned. With all systems on, the car faithfully cleaves to the driver’s intended driving line — at least to the extent that physics can allow (which is impressively high when the various electromechanical traction assistants are abetted by a set of Continental ContiWinterContact footwear). Switch ASR off and deep prods at the accelerator are rewarded with satisfying countersteerworthy slides at 30 or 40 degrees of slip angle (after which the systems step back in to reign in the fun).

On the privately owned and snow-covered Timmelsjoch pass, which leads from Hochgurgl to Italy the E350 tracked straight and true, whether accelerating, braking, dodging snow ruts, or wiping one’s chin from saying Hochgurgl out loud. E350 4Matics bound for the U.S. won’t come with towing packages (simply because Americans habitually use trucks or SUVs for towing), but in Europe it’s rated to tow 4600 pounds and the all-wheel-drive system made easy work of climbing the steep, snow-covered road leading to the resort’s helipad towing a 2650-pound snowmobile trailer. The factory hitch is super-cool too: It stows up under the car, swinging out and locking into position by way of a release latch that lives up in the warm, dry cargo area. And the wiring harness attachment is integrated into the hitch, so it’s easily reachable and visible. Brilliant.

Enhancements to the business end of this newest W212 series station wagon include a now standard power tailgate, programmable to a maximum height for use in low-clearance garages (the cargo shade even rises automatically). Pulling a lever located on either side near the hatch opening will automatically lower that side’s middle-row seatback head restraint(s) and drop the seatback, motoring the corresponding front seat out of the way if necessary, leaving a nearly flat load floor (front seat riders will have to readjust their seats afterward). To make this possible, however, the middle-row seat bottom cushion had to be lowered nearly a half-inch relative to the sedan’s, reducing thigh support somewhat.

The seat is still comfortable, however, offering oodles of headroom and a panoramic view of the passing Alpine scenery. Another cool feature: once the rear doors have been opened and closed, a screen on the driver’s information display indicates which (if any) seat belts have been fastened. The Euro-spec test cars didn’t have third-row seats installed, but judging by the depth of the cargo well, we can guess that foot room is decent, but E-wagon third-row seats have generally been best suited to transporting children.

The 2011 E350 4Matic wagon goes on sale in June, 2010 (all-wheel-drive sedans are available now) at a price that’s yet to be determined, but if the price difference relative to the sedan stays roughly the same as it was on the W211 generation, it should drop to $54, 500 or so. That’s about the price of four deluxe ski weekends for seven at the Top Hotel Hochgurgl (Austria’s highest ski resort, and the world’s highest Relais & Chateaux resort) — maybe less, if you can say the town without spraying it.