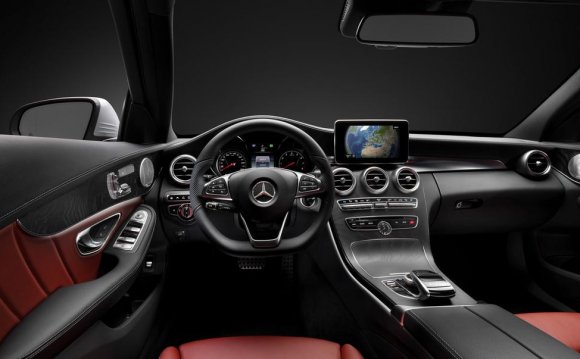 The 2015 Mercedes-Benz C-Class is slightly larger, more luxurious, and more beautiful than ever before, ushering in a new era of design and equipment for the brand’s mainstream luxury sedan. From the look and feel to the dynamics and technology, the C-Class makes a strong argument for a position as class leader, making strides into territory once held by larger luxury sedans thanks to the entry of the CLA-Class sedan below it.

The first thing you’re likely to notice about the 2015 C-Class is its striking exterior. You’d even be forgiven for mistaking it for the much larger and more expensive S-Class from a distance. But we like how the new C-Class doesn't just ape the Mercedes flagship; it has its own profile, and its own details. Inside, the styling upgrade is even more apparent, and even more in line with the S-Class. Large round vents, a flowing center console, and inlaid metallic-look panels in the door all speak a design language that’s usually reserved for larger and more expensive cars.

The 2015 C-Class launched in August, 2014, in just two forms, both coming with standard 4Matic all-wheel drive: the C300 and the C400. The smaller designation denotes a turbocharged 2.0-liter four-cylinder engine rated at 241 horsepower and 273 pound-feet of torque. The larger, the C400, gets a twin-turbocharged V-6 engine good for 329 horsepower and 354 pound-feet of torque. In the first quarter of 2015, a rear-drive version of the C300 became available; both diesel and hybrid versions are also expected to be offered in America eventually. All announced versions of the 2015 Mercedes-Benz C-Class in the U.S. use a seven-speed automatic transmission.

In April, 2015, the new Mercedes-AMG C63 and C63 S join the 2015 C-Class range, adding huge power figures, impressive handling, and more aggressive style. With a twin-turbocharged 4.0-liter V-8 engine rated at 469 horsepower and 479 pound-feet of torque, the standard C63 is capable of very brisk acceleration (4.0 seconds to 60 mph) and an electronically limited top speed of 155 mph. The C63 S rates 503 horsepower and 516 pound-feet of torque, reducing 0-60-mph times to 3.9 seconds, but still limited to 155 mph. The C63 S’s extra power and torque is much more noticeable behind the wheel than the stats would suggest, with palpably more power on demand at any given time or rpm.

With the C63 and C63 S on sale, the C400 has rather less riding on its shoulders in terms of performance. But the C400 4Matic, which comes standard with Mercedes’ Airmatic suspension, does not intend to be a sport sedan first and foremost. Instead, it’s a luxury sedan with ample power and a planted, stable ride. The C400 isn't aimed for track-day enthusiasts; don’t count that as a demerit, however, as the 2015 C400’s on-road demeanor is expertly balanced, putting passenger comfort and confident dynamics at the fore.

Between the two non-AMG models, the C300 is our preference. In most kinds of driving, it feels just as quick as the 400; and only when your right foot is mashed to the floor do you notice that it's actually a bit faster - especially in highway passing situations. It should return significantly better fuel economy, too. And at an event where we drove both, we didn't notice any real improvement in ride, and we preferred the more straightforward handling of the standard suspension.

A highlight of the new 2015 C-Class, including the AMG models, is its interior, which is the new class leader in terms of style and sophistication. Even apart from the headline option items, like a Burmester sound system, new touch-controlled COMAND infotainment system, or Mercedes’ suite of safety technologies called Intelligent Drive, the cabin of the new C-Class exudes luxury in a way that none of the existing alternatives from other brands—or even Mercedes’ own outgoing C-Class—can manage. Material quality, fit and finish, and design are all top-notch, class-leading. There’s no aspect of the cabin that feels like a cut corner or a cost-savings measure. Optional trims include a gorgeous open-pore black ash wood that feels like it comes from a car several classes higher.

The luxurious cabin has grown larger for the new generation as well, a freedom gained by the introduction of the smaller CLA-Class below. Greater wheelbase means more rear-seat leg room, and while six-footers won’t have abundant space for knees, elbows, or noggins, they’ll fit with adequate comfort for even fairly extended drives. The front seat is spacious, with plenty of leg, head, and shoulder room, though the width of the (rather beautiful) center console can impinge on side-to-side knee room for the longer-legged. Entry and exit to the back seat also seems to have fallen victim to the roofline and more aggressive door cutlines. Trunk space is 12.6 cubic feet, and the rear seatbacks flip forward easily (and flat).

So far, the C-Class has a mix of crash-test ratings—not quite top-tier but respectable. In federal testing it's earned a mix of four- and five-star ratings, while in Insurance Institute for Highway Safety (IIHS) it has 'good' results but full results aren't yet in (for small overlap, for example). Gas mileage ratings span a range from 24 mpg combined to 28 mpg combined, depending on drivetrain specifications.