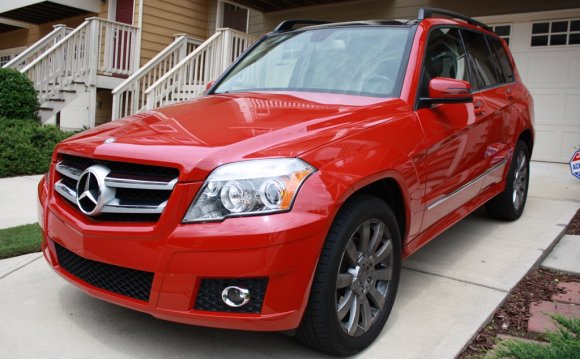 Among crossover utility vehicles, the Mercedes-Benz GLK-Class holds a unique position: A buff and rugged-looking appearance, more boxy than the likes of the BMW X3 and Acura RDX, is paired with a driving feel that's surprisingly carlike, and packaging that feels much like a tall station wagon. As such, the GLK delivers a sweet spot for those who want a rugged look, high seating position, and strong performance.

With what's close to a classic, upright SUV profile, with hard-edged details, the GLK takes the exact opposite tack in design direction compared to most rival brands, except for Land Rover. The GLK doesn't bear much family resemblance to the larger ML-Class from the outside; rather, it looks like a scaled-down version of the big GL-Class. Yet it's not pure box either. The overall look is clean and distinctive, but one that might have to grow on upscale buyers; in the profile, we also see a slightly larger interpretation of the mid-'90s Japanese crossover designs for vehicles such as the Subaru Forester and Mitsubishi Outlander.

Inside, it's more of the same: The GLK's instrument panel bears a striking resemblance to BMW interiors—and a lower-set version of what's used elsewhere in the M-B lineup—but the gauges and controls are remarkably straightforward. A wide swath of wood trim that helps dress up some of the obvious plastics and underscores a vaguely retro tone that lingers through the cabin.

All 2011 Mercedes-Benz GLK-Class models for the U.S. remain powered by a 268-horsepower, 3.5-liter V-6 engine—and called the GLK350. The V-6 makes 268 horsepower, more than enough to give the roughly 4, 100-pound GLK strong acceleration—about 6.7 seconds to 60—and feels relaxed during normal driving. That ample power is transmitted to the road through 4MATIC four-wheel drive and a seven-speed automatic transmission. .

Off-roading is not the GLK's forte. But its four-wheel-drive system adjusts as the various traction systems determine where torque is needed most. What the GLK does do well is get you home safety in foul weather; the 4Matic system excels in distributing power smoothly on a snowy road and avoiding wheelspin.

The GLK's cabin and cargo areas are roomy and upright. In front, the driver and passenger will find the seats supportive and nicely tailored, and taller drivers especially will have no problem finding a comfortable driving position. In the second row, the three-person bench has good enough knee room, and the straight-back roofline affords a lot of headroom—plus the seats flip and fold to create a cargo area of 54.7 cubic feet. The standard upholstery in the GLK320 is a synthetic, which we've found to be just fine, but leather is of course available.

Mercedes-Benz has tuned the GLK's suspension to be taut but well damped; it doesn't allow the GLK much body motion, but the suspension will soak up most roughness from the road and the cabin stays tight and quiet even over rough roads or in high-speed cruising.

The 2011 Mercedes-Benz GLK-Class might be one of the most affordable vehicles from the German automaker, but take even a brief look at the feature set and there's no mistaking it as a luxury vehicle. The GLK's standard equipment list is comprehensive and includes 19-inch wheels, dual-zone automatic climate control, power front seats, leather trim, a panoramic sunroof, and Bluetooth connectivity. A six-CD changer, Sirius Satellite Radio; a rear-seat, twin-screen DVD entertainment system; a power liftgate; a navigation system; bi-xenon headlamps with washers; LED taillights; and 20-inch wheels are among the options.