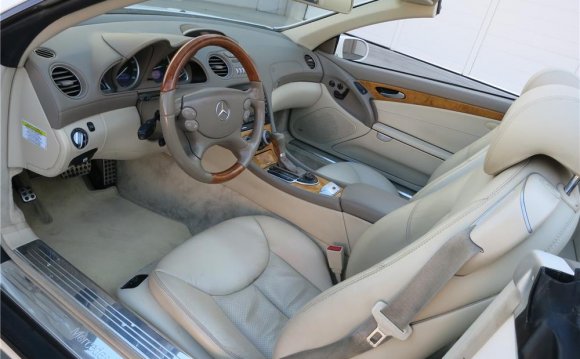 The '07 Mercedes-Benz SL is powered by the new-generation four-cam 32-valve V-8 also seen in the redesigned S-class cars. In the SL550 it produces 382 horsepower - fully 80 horses up on the previous model. The new engine also allows installation of a seven-speed automatic transmission with manumatic override that is capable of gearshifts 30 percent quicker than before.

The steering was retuned with faster response and revalved assistance for better feel, and the active-body-control (ABC) system was recalibrated to be 60 percent stiffer in roll in the sport mode. These are upgrades you can feel at every tactile interface with this car, and they provide better feedback to the driver without hurting the SL's exceptional refinement. The excellent retractable hardtop required no revisions.

But just as with the Porsche 911, the hearts of our unemotional drivers had to be won over during the course of the test. Initial comments slated the SL for numb steering, hard-to-read brake-pedal feel, and a general sense of weightiness. One politically incorrect guy even had the effrontery to suggest that the SL was "like dancing with a fat lady. She can do it, but you won't win any prizes."

At 4180 pounds, the SL is the second-heaviest car in the group (beaten only by the porky BMW 650i), and its lane-change performance conformed exactly to those rankings. Its skidpad grip, too, came in second to last, at 0.84 g. But the SL's stability system cannot be disengaged, and that undoubtedly plays a part.

Out in the wiggly bits of asphalt laughingly referred to as the highway, none of this seemed to matter. In fact, the remarkable transformation was greeted with these words: "Very entertaining for a car so aloof in the city. Really comes alive."

Indeed, it does. The SL bit into curves with steering feedback that made most of the other cars feel like video games. We hardly bothered with the manumatic buttons, because the adaptive facility in the full-automatic mode is so intelligent - psychic, even - that it seemed to sense our every need. If you've been tramping along, the tranny will hold gears for high-rev shifts, even at less than full throttle, and it'll let you back off for a corner entry without an upshift so you can nail it hard at the exit.

Even the brake-by-wire system felt lively during sporty driving, with plenty of bite and easily read modulation. And best of all, that 5.5-liter V-8 feels as if it were tweaked by the AMG magicians, capable of strong low-rev thrust along with a hearty rush to the redline. And did we mention that the sound effects are music to the ears?

For a comparatively large and heavy car, the SL seems to shrink at a quick pace in challenging terrain. Its cockpit is comfortable and roomy, even as the windshield, dashboard, and controls are all at an intimate proximity. The seats are excellent, with firm cushioning and supportive contours, and the active-body-control system is so effective you feel g-forces as pure lateral thrust.

This Mercedes is deceptively quick, so fast it led us down Route 58 through California's Kern County at such a brisk pace that the car got air over a whoop we'd never negotiated so fast before. It wasn't that high, and the car greased the landing like an airline professional, but the onboard safety sentinels saw suspensions at full droop and popped the roll-protection hoop. That was the extent of the drama.

When you add those vigilant (but not intrusive) safety systems to everyday refinement, a transcendent high-performance personality, comprehensive equipment levels, and unimpeachable solidity, you have a class-leading combination. Among high-end convertibles, this one commands the highest currency.