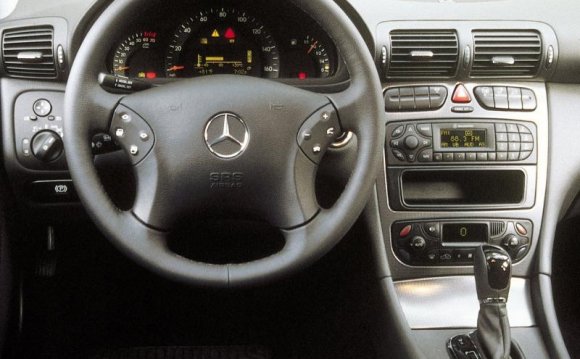 Minor changes for the 2007 Mercedes-Benz C-Class include the discontinuation of the high-performance C55 AMG model and added flex-fuel E85 capability for the C230.

Like an overlooked middle child pining for attention, the 2007 Mercedes-Benz C-Class sedan is the entry-level car in a lineup defined by luxury, prestige and price tags that can run into six-digit territory. But despite its less elevated standing within the Mercedes hierarchy, its substantial sales numbers make it every bit as important as the flagship S-Class.

The 2007 C-Class lineup, which includes the C230, C280 and C350 sedans, offers the typical Mercedes-Benz virtues of solidity, safety, luxury and comfort. With styling cues (such as a low hood line, arced roof line and triangular taillights) evocative of the larger E-Class, this Mercedes-Benz has no trouble drawing admiring glances. Of course, having the three-pointed star on the hood doesn't hurt, either.

Though recent updates have kept the car reasonably fresh, the C-Class' design does date back to 2001. For shoppers in this segment, this becomes obvious when you compare the Mercedes against revitalized competitors like the Audi A4, BMW 3 Series, Infiniti G35 and Lexus IS. Its handling dynamics aren't particularly exciting for a sport-oriented sedan, and its cabin is let down by a small backseat and ordinary furnishings. While these faults won't necessarily be deal-breakers for consumers shopping in this segment, they prevent the car from being one of our top choices.

Three V6 engines see duty in the Mercedes C-Class lineup. The C230 has a 2.5-liter V6 that provides 201 horsepower and 181 pound-feet of torque. The C280 features a 228-hp 3.0-liter V6. The top-of-the-line C350 employs a 3.5-liter V6 good for 268 hp and 258 lb-ft of torque. The C230 and C350 Sport have a standard six-speed manual transmission and an optional seven-speed automatic. The C280 and C350 Luxury have the automatic transmission as standard equipment. All Sport models are rear-wheel drive, but Luxury models are available with either rear-drive or 4Matic all-wheel drive. In cars with 4Matic, a five-speed automatic transmission is used. The fastest model in the lineup is the C350 Sport; with a manual transmission, expect a 0-60-mph time of 6.0 seconds.

Standard safety features include antilock disc brakes, stability control and six airbags that include front-seat side airbags and full-length side curtain airbags. Rear-seat side airbags and the TeleAid emergency call system are optional. In NHTSA crash tests, the 2007 Mercedes-Benz C-Class scored four out of five stars for driver and front-passenger protection in frontal impacts, and five stars for front and rear side-impact protection. The IIHS gave the C-Class a "Good" rating (its highest) for the car's performance in the 40-mph frontal-offset crash test. The C-Class earned an "Acceptable" rating (second-highest) in IIHS side-impact testing.

Given the compact dimensions of the C-Class sedan, there isn't a lot of legroom in the backseat, and adult occupants are apt to complain on anything more than short trips. Furthermore, the pricey C350's cabin lacks the elegance of some peers. The dash has a dated, utilitarian look that seems out of place in this class of car. The metal-ringed gauges look modern at least, and most materials are quite nice, but there are a few cheap plastics here and there, including those used for the adjustable vents on the dash. The trunk holds 12 cubic feet of cargo, which is about average for this class of car.

As one would expect, the 2007 Mercedes-Benz C-Class is a comfortable car that excels at pampering its occupants. The 3.5-liter V6 is by far the best engine of the lineup, but either of the smaller engines will likely be adequate, especially if you're restricted by budget. In terms of handling ability, Sport models don't feel as light on their feet as other top sport sedans. But they turn in aggressively and offer decent grip. Body roll is reasonably well controlled, but driving enthusiasts will likely wish for even firmer damping and more steering feedback.